This market continues to play out almost exactly like the 2011 sell off.  Believe me, every year is different, and history doesn’t repeat itself, but it rhymes.  We mentioned the similarities to 2011 here, here and here.

In October of 2011, the SP500 had a massive rally off the lows, and that briefly got it above the year to date breakeven level and above the 200-day moving average, this is exactly what just happened in the SP500 almost exact to the day. 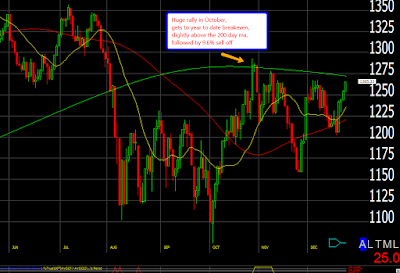 Here is where it gets interesting; “… the SPY’s 2015 price action continues to follow the pattern of 2011, even down to how it has behaved in October of both years. In other words, following bullish key reversal days in the first week of the month and bull gaps the day after the key reversal, there was a shallow pullback to the 10-day moving average mid-month, from which a rally followed. In 2011, the rally lasted into month-end, at which point the SPY declined by 9.5% into late November.”–Read the rest here Schaeffer Research

The above similarities should only be used as a possible road map, if the SP500 gets below its year to date breakeven level (2,058.90), then I believe the above pattern has a good shot of playing out.