The Coast Is Clear, Ready For Liftoff

The Coast Is Clear, Ready For Liftoff

The market works in a masterful way, and sometimes it lulls you to sleep and then pulls off the covers, and then it scares the living Jesus out of you just to tell you it was only pretending.  By 7/30/15 the market had been going sideways for seven months, the breadth was deteriorating but the SP500 was holding up well.  There were a plethora of blogs stating that the deterioration of breadth was irrelevant; we challenged that thinking with this post; The Market Dilemma That Is Driving Everyone Nuts.

After that, the market sold off hard, by 8/24/2015 many were saying that we can have a 1987 type day all over again.  To remind you, on Black Monday the Dow was down 20% for the day. Again sentiment gets to an extreme after a short term extreme move, well, it wasn’t 1987, and we stated that here; Is The End Near.

Fast forward to 9/28/2015, the SP500 is down five days in a row, seven out the last eight days, and the financial twitter stream is pounding the table on how oversold can remain oversold and that crashes happen when the markets are oversold.  To boot, Carl Icahn releases a video titled “Danger Ahead”, it spooks everyone, it gets 24-hour coverage from the media, we felt a little different, explained here.

Here is the visual. 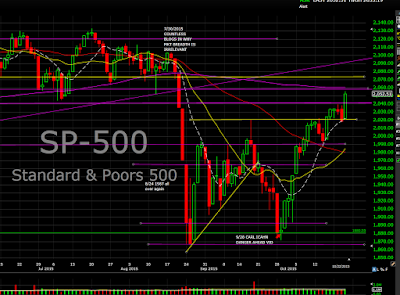 Since the Danger Ahead video, the SP500 has had a significant rally that has left many behind and will make all the hedge fund managers that just reported double-digit losses for the month of September look even worse when compared to the SP500.  We still have a ton of overhead supply to deal with and the relevant year to date breakeven level 2057 for the SP500.  The 2057 level acted as support for the SP500 for the 1st half of the year, once we broke that level convincingly on 8/20/15, all hell broke loose. Whether or not this level will prove to be a major hurdle remains to be seen. However, today’s after hours news has many excited about the prospects.

Google and Amazon reported their earnings in the after hours; both stocks are up to the tune of 10% in after-hours trading. After a 10% rally in the SP500 in the last 17 days, this news has many participants thinking that it will be a straight line from here until year end.  After short term extremes is when many forget that the market goes up AND down not up OR down, the same way it did on 8/24/15, and on 9/28/15.

The news in the after hours is no doubt a reason to be excited, but one must restrain oneself from chasing short term extremes to the upside and downside.  These huge after hours related earnings gap is exactly what happened last quarter with both Google and Amazon as you can see below. 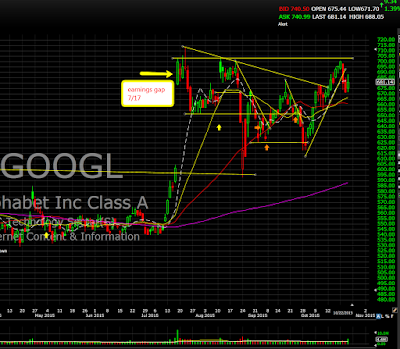 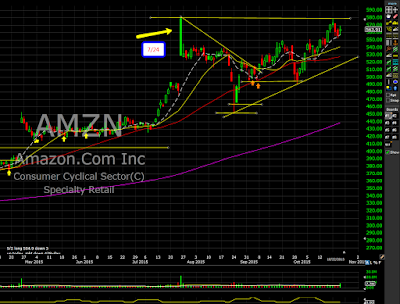 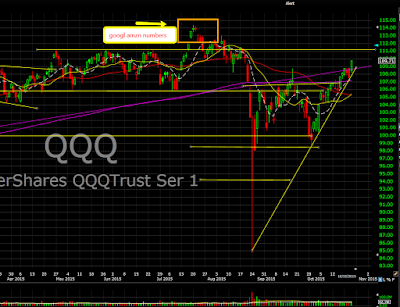 The Chances of the current scenario playing out the same way are slim; the point is not to chase. Wait until the market gives you a favorable risk-reward opportunity.  What happens when you chase is that any normal pullback will shake you out and take a toll on your mental capital.

One can conclude that there is STRONG bid below the market that more than likely will stay in place until year end due to seasonality and year end chasers.  However, we must remember the above facts when the market pulls back, and your instincts have you running for the exit.

Work With Me
Stay Informed
This information is issued solely for informational and educational purposes and does not constitute an offer to sell or a solicitation of an offer to buy securities. None of the information contained in this blog constitutes a recommendation that any particular security, portfolio of securities, transaction, or investment strategy is suitable for any specific person. From time to time, the content creator or its affiliates may hold positions or other interests in securities mentioned in this blog. The stocks presented are not to be considered a recommendation to buy any stock. This material does not take into account your particular investment objectives. Investors should consult their own financial or investment adviser before trading or acting upon any information provided. Past performance is not indicative of future results.
By Frank Zorrilla|2018-02-02T12:09:27-05:00October 22, 2015 7:05 pm|