W&T Offshore is an independent oil and natural gas producer in the Gulf of Mexico. It holds interests in approximately 54 offshore fields, interests in roughly 900,000 gross acres and it has total proved reserves of 76.4 million barrels of oil equivalent.

What’s interesting about the stock at this very moment is not only the fact oil is surging higher due to the recent Opec deal in which W&T could be a major benefactor. But, it’s the recent insider buy by the Chairman & CEO Tracy Krohn. On December 7 (last week) Tracy bought 1,000,000 of WTI at $1.94, on December 8th he bought 180,888 shares also at $1.94 bringing the amount of shares that he owns in a total to 42,642,712 shares.

According to Finviz and Yahoo W&T Offshore has roughly 137 million shares outstanding, 92 million in the float and 11% of that float is short with a short interest ratio of around 11 days.

Hedge Funds also showed an interest in the stock; only six hedge funds owned WTI at the end of the second quarter; that number was boosted to 10 as of 9/30/16. 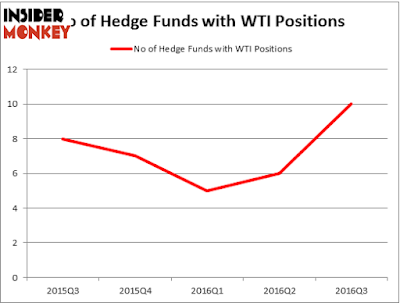 The stock has been in a downtrend for a very long time, but it is finally showing some signs of life; the first time in a while the is trading above its 50 and 200 day moving averages. The 50-day is now curling higher, and the 200-day is flattening out. 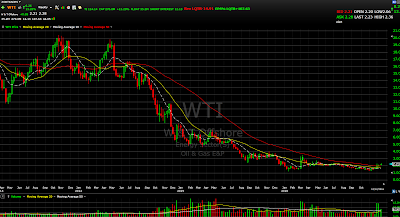 Bottom line; when you put all the pieces together; OPEC deal, oil surging, oil stocks surging, insider buying, CEO owns a bulk of the float, high short interest, renewed hedge fund interest, long-term downtrend coming to a halt, above its intermediate and long-term moving average, and you have the potential of the beginning of something big starting.
Frank Zorrilla, Registered Advisor In New York. If you need a second opinion, suggestions, and or feedback in regards to the market feel free to reach me at fzorrilla@zorcapital.com or 646-480-7463.
See How I Translate My Tweets & Blogs Into Actual 3rd Party Verified Trades
Work With Me
We live in a world in which we are bombarded with information, tweets, blogs, etc., content is the new salesman, content is the new marketing, content is the new networking. With information being so readily available, bloggers try to differentiate themselves with their writing skills, volume, and consistency, putting out blog posts to meet quotas. We are seeking to stand out from the crowd by showing performance, by taking all the information and seeking alpha, that’s the sole purpose of the blog. It won’t always be pretty; it’s never easy, and performance is spotty, but we seek superior risk-adjusted returns, not notoriety for our writing skills.  If this is something you can relate to, then this blog is for you.
By Frank Zorrilla|2018-02-02T12:07:53-05:00December 13, 2016 9:17 am|