Two Growth Stocks To Keep On Your Radar

Two Growth Stocks To Keep On Your Radar

Zillow Group ($Z) and Impinj ($PI) are two stocks that many consider growth names. What’s interesting about both stocks is that the reaction to their earnings results catapulted both stocks from long bases. The weekly earnings low on both stocks give you a clear stop loss if you were to get involved in the names. 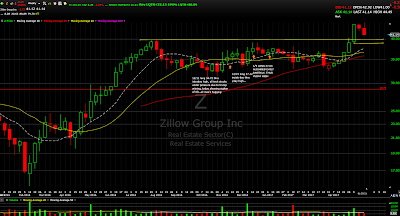 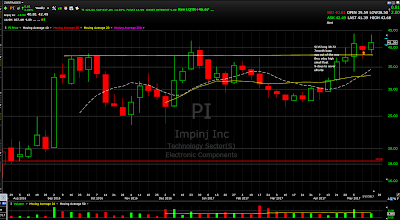 ZILLOW’S First Quarter 2017 Financial Highlights
IMPINJ Highlights from IBD;
Impinj earned an adjusted 1 cent a share, reversing a year-ago loss of 7 cents a share, in the March quarter. Sales rose 47% to $31.7 million. Analysts were expecting Impinj to lose a penny a share on sales of $30.7 million.
Impinj RFID chips are used by businesses to track such items as apparel, medical supplies, automobile parts, luggage and food. Applications for its technology include inventory management, patient safety, asset tracking and item authentication.
“Demand for item intelligence continues to accelerate from a broad set of customers and industries, and will provide a sustainable tailwind” for Impinj, Piper Jaffray analyst Troy Jensen said in a report. “Impinj remains an industry leader and is well positioned to experience strong near- and long-term revenue growth as the industry continues to inflect.”

Frank Zorrilla, Registered Advisor In New York. If you need a second opinion, suggestions, and or feedback in regards to the market feel free to reach me at fzorrilla@zorcapital.com or 646-480-7463.
See How I Translate My Tweets & Blogs Into Actual 3rd Party Verified Trades
Work With Me
We live in a world in which we are bombarded with information, tweets, blogs, etc., content is the new salesman, content is the new marketing, content is the new networking. With information being so readily available, bloggers try to differentiate themselves with their writing skills, volume, and consistency, putting out blog posts to meet quotas. We are seeking to stand out from the crowd by showing performance, by taking all the information and seeking alpha, that’s the sole purpose of the blog. It won’t always be pretty; it’s never easy, and performance is spotty, but we seek superior risk-adjusted returns, not notoriety for our writing skills.  If this is something you can relate to, then this blog is for you.
DISCLAIMER
By Frank Zorrilla|2018-02-02T12:06:10-05:00May 18, 2017 1:32 pm|