The Easiest Way To Lose Money In The Market

The Easiest Way To Lose Money In The Market

A sure way to lose money in the market is to chase performance, getting involved in a train that left the station a long time ago.  Chasing performance is probably the most common mistake investors make. Not only mom and pop investors, but institutional investors are just as guilty.

Ichan Enterprises is down nearly 50% since Time Magazine (December, 2013) put him on the cover “The Original Wolf Of Wall Street Returns”. 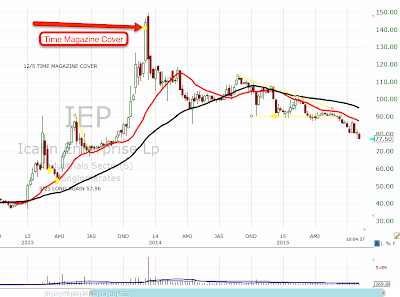 You can only imagine how many people jumped on that runaway train due to looking at what IEP had just done, thinking that type of performance could be easily replicated again immediately after they bought in, basically counting the chickens before they hatch.

This reminds me of a similar situation that happen years ago with Ken Heebner.  Fortune ran an article “America’s Hottest Investor” (May, 2008).  Investors literally tripped over themselves to throw money at Heebner after an incredible 80% year.  Even though Heebner had the best 10 year track record of any mutual fund as of November 30, 2009, the typical CGM focus fund lost 11% annually in the 10 years ending November 30, 2009. 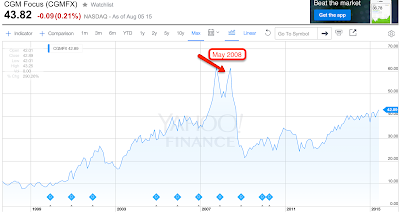 WSJ; The gap between CGM Focus’s 10-year investor returns and total returns is among the worst of any fund tracked by Morningstar. The fund’s hot-and-cold performance likely widened that gap. The fund surged 80% in 2007. Investors poured $2.6 billion into CGM Focus the following year, only to see the fund sink 48%. Investors then yanked more than $750 million from the fund in the first eleven months of 2009, though it is up about 11% for the year through Tuesday.

The moral of the story is; DON’T CHASE.  All we have to do now is wait until we get the magazine cover that says “The Death of Carl”.