.Many investors have given up on the energy names due to its recent performance.  This is an ongoing cycle that has been around forever, overweight what has been working and ditch what has not.  When investors give up it is usually the best time to get involved.

The fact that ProShares on 9/24/15 came out with an SP500 ETF minus energy names tells you exactly where we are on the chart above. The XLE bottomed three days later and had an incredible 10% run in the last eight trading days. Here in the short term XLE is overbought, but I believe that pullbacks to the $64 level should be bought by long-term investors. 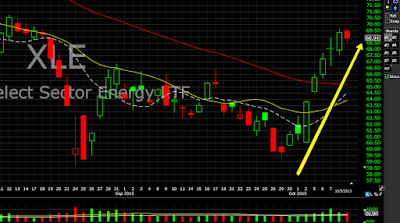