Is it 2008 all over again and why is the market crashing were the two question I was asked the most between the end of January and the beginning of February.  Real-time to the second information has been and will continue to be a huge distraction for investors. Tuning out the noise has never been more important.  Despite the fact that the average intra-year decline since 1980 for the SP500 is roughly -15%  people were freaking out when we were down -8%.  And they acted on it.  We saw a massive amount of put buying by small investors, similar to the record levels we saw in 2008 when we had a REAL treacherous bear market.  The amount of money flowing into the Rydex bear funds was almost 3x higher than the 2008-2009 levels.  Sentiment polls also showed more bearishness than the 2008 levels, when we finally get a real bear market we are going to redefine what extreme bearish sentiment is. 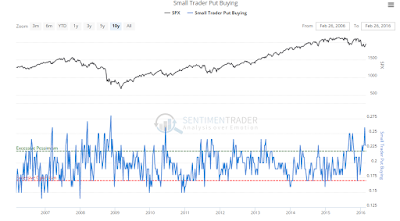 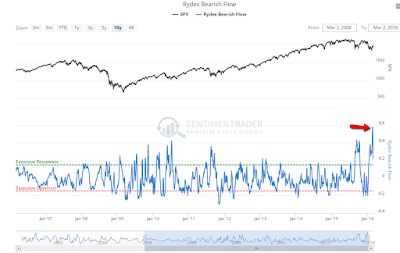 Fast forward to today, the SP500 has recovered most of the losses for the year, we are now down only -2.8%.  Chances are high that in the short-term pullbacks will be bought and contained until the negative sentiment unwinds.  However, if you were one of the many who in late January had multiple reasons why this year was going to be 2008 all over again, and felt very uncomfortable with your allocation to stocks now is the time to pare down and get to a comfortable level that won’t keep you up at night.  Or, you can allow the market to force your hand if we roll over again.  Quite frankly, I don’t think we are out of the woods yet.