Two Amazon Derivative Plays That Are Ready To Fly

Two Amazon Derivative Plays That Are Ready To Fly 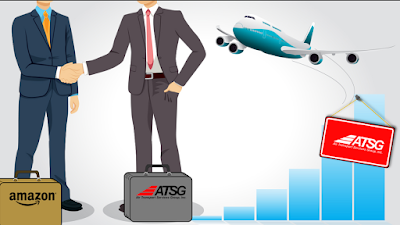 Atlas Air Worldwide ($AAWW) and Air Transport Services ($ATSG), are two stocks worth keeping an eye on for the next few quarters because of their recent partnership with Amazon.
On 3/8/2016 Air Transport Services signed this deal with Amazon “ Aircraft lessor Air Transport Services Group Inc said it would lease 20 Boeing 767 freighter planes to Amazon.com Inc as the online retailer looks to operate its own air cargo network.As part of the deal, Amazon also has the right to buy up to 19.9 percent of ATSG’s stock over five years at $9.73 per share.”
On that news, ATSG was up as much as 24% the next day and closed up 16% on the news. Since then the stocks has digested the gains by trading sideways.
On 5/4/2016 Atlas Air Worldwide signed a similar deal; “Amazon (AMZN) and Atlas Air Worldwide (AAWW) have inked a long-term air cargo services deal that gives the e-commerce titan the rights to acquire up to a total of 30% equity of the outsourced aircraft provider as Amazon fortifies its delivery capabilities.
The deals, which involve 20 B767-300 converted freighters, go into effect in the latter half of the year and will “ramp up to full service through 2018,” said Atlas Air. These include 10-year dry leases by its Titan Aviation leasing unit and 7-year crew, maintenance and insurance operations agreements.
Under the terms of the agreement, Amazon can acquire up to 20% of Atlas Air’s common shares at 37.50 a share over the course of five years, and up to another 10%  at the same price over a period of seven years.”
Atlas Air Worldwide was up as much as 50% the next day on the Amazon news and closed up 26%.  Since then the stock has settled down, and volatility has contracted.
There’s no doubt that these two stocks will be huge benefactors from Amazon’s dominance in the retail world for many quarters to come.
Source; Reuters, IBD
My opinion and outlook are subject to change as new information comes in.
Frank Zorrilla, Registered Advisor In New York. If you need a second opinion, suggestions, and or feedback in regards to the market feel free to reach me at fzorrilla@zorcapital.com or 646-480-7463.
See How I Translate My Tweets & Blogs Into Actual 3rd Party Verified Trades
Work With Me
The information in this blog post represents my own opinions and does not contain a recommendation for any particular security or investment. I or my affiliates may hold positions or other interests in securities mentioned in the Blog, please see my Disclaimer page for my full disclaimer.
By Frank Zorrilla|2018-02-02T12:08:15-05:00June 14, 2016 9:23 am|