It was an unforgettable week for Wall Street and Main Street. It all started Tuesday night, as Trump chances of winning was becoming clearer the dimmer the Futures were looking. At around 11 pm when it was almost clear that he would be the new President the SP500 futures were limit down -5%. 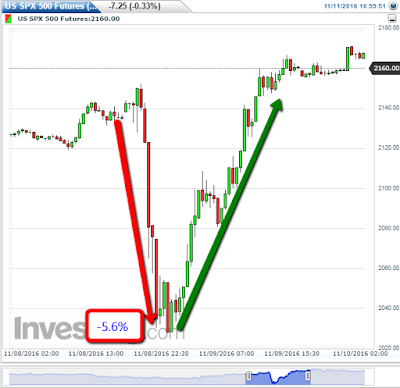 One has to wonder if Hillary had won if the reaction would’ve been the exact opposite; limit up first and then limit down.

Leading up to the elections there was a lot of put buying, and one can argue that many were caught off guard on the short side and then were forced to cover. 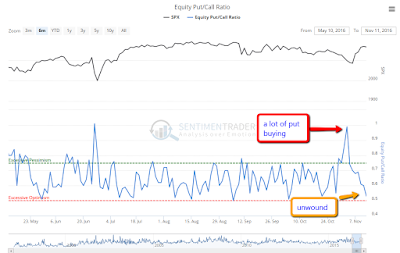 Small caps, Biotechnology, Industrials, and Copper were the standouts on the positive side. FANG (Facebook, Amazon, Netflix, Google, Apple, and many other technology stocks were the clear losers, along with Gold, Gold Miners, Bonds, and Emerging Markets. The huge moves in the winners and losers this week probably was overdone. These are ‘bigly’ moves are based on hope and possibilities of what can change with the new administration, changes that may or may not happen, and regardless it’s way too soon.

Suddenly, a couple of legendary (Carl Icahn, Stanley Druckenmiller) investors who have been bearish for years turned bullish and are now confident about the market/economy and our new elect President. In hindsight, their bearish view now looks more like it was political more than anything else. Three days in and suddenly a Trump presidency detoured the U.S economy for these guys? By looking at Icahn’s stock any change is good, look below. 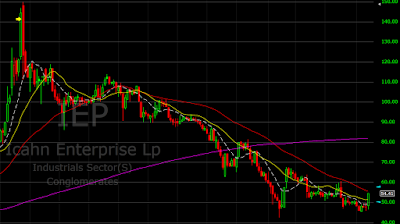 The small-cap index had a helluva week, the type of rally it had this week typically only happens when you are in a deep bear market. It seems like they try to price in 4-years of a Trumpstatic economy in 3 days. 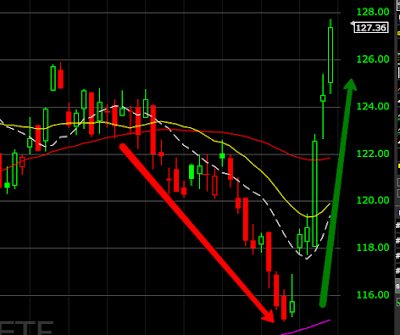 The overly enthuse will think this will be a non-stop move higher, but the tendency of the last few years has been for the market to stall and turn down after touching highs.  Here you have the stats when the Small Cap index has had a winning streak of 5-days or more. 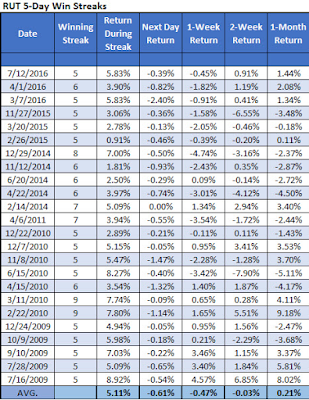 The case for the move higher in biotechs/pharma this week was the fact that the Republicans won the house and that Hillary lost, maybe the new administration won’t come down as hard on them for price gouging.  Another reason for the bullishness this week might be the fact that U.S. based pharma companies have $98-billion overseas that might have to come back into the U.S. and that could lead to significant acquisitions in the sector. For more on this click here.

The fear in the FANG stocks might come from comments Trump made during his campaign. Fear that they may have to bring back all the cash they have overseas and pay a massive tax bill, or it could just be a huge rotation into stocks that might benefit more under the new elect, I think it is way too early to come to a conclusion.

The market is very dynamic, and it never pays to have firm opinions based on what you think is going to happen.

Here is a possible playbook based on previous presidential cycles; 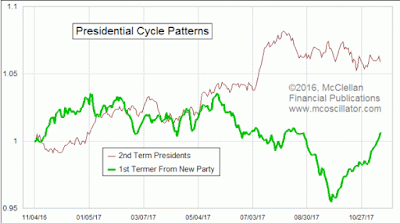