An Interesting Finding That Probably Means Nothing

An Interesting Finding That Probably Means Nothing

The great Urban Carmel from Fat-Pitch.blogspot.com pointed out that the average intra-year decline when the SP500 has been positive January and February is roughly -7 to -9%. 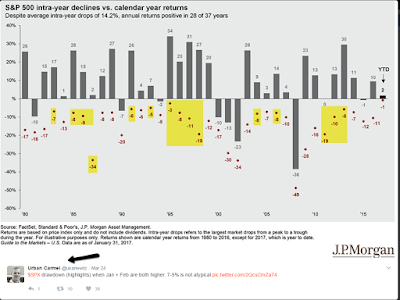 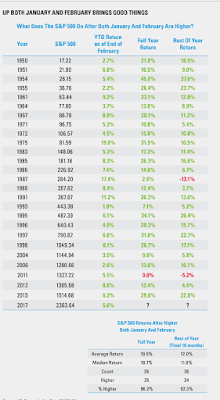 What I found interesting was that most recent pullbacks under this January-February criteria have commenced in the month of May.

This does not mean that you sell in May and go away, but should be on the look out for quick shakeouts.

Frank Zorrilla, Registered Advisor In New York. If you need a second opinion, suggestions, and or feedback in regards to the market feel free to reach me at fzorrilla@zorcapital.com or 646-480-7463.
See How I Translate My Tweets & Blogs Into Actual 3rd Party Verified Trades
Work With Me
We live in a world in which we are bombarded with information, tweets, blogs, etc., content is the new salesman, content is the new marketing, content is the new networking. With information being so readily available, bloggers try to differentiate themselves with their writing skills, volume, and consistency, putting out blog posts to meet quotas. We are seeking to stand out from the crowd by showing performance, by taking all the information and seeking alpha, that’s the sole purpose of the blog. It won’t always be pretty; it’s never easy, and performance is spotty, but we seek superior risk-adjusted returns, not notoriety for our writing skills.  If this is something you can relate to, then this blog is for you.
DISCLAIMER
By Frank Zorrilla|2018-02-02T12:06:20-05:00March 29, 2017 11:14 am|