The news of the day again was China and billionaire investor George Soros, who said we might be in a 2008 situation again.  But the fact is that the average intra-year decline in the S&P500 in the last 35 years is roughly 14%.  Until we breach that mark then this all part of the game. 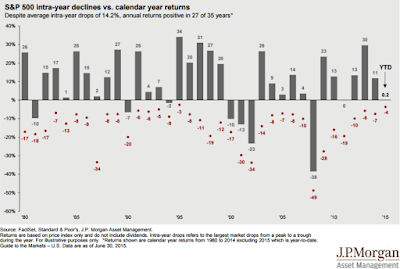 With today’s near 400 point decline in the Dow Jones, CNBC and Bloomberg both have a “Market in Turmoil” scheduled for tonight.

More importantly, breadth in the short term is getting a little stretched to the downside that might lead to some short-term respite (3-5 days).

Here are the stretched breadth charts:

We saw a significant spike in stocks down 4% or more today; spikes tend to be short-term positive.

We also saw a large spike today in stocks down 13% or more in the last 34 days; spikes tend to be a short-term positive.

The percent of stocks above their 20-day moving average is also pointing at a dead cat bounce, unless of course we crash, and that rarely happens.

The same can be said for 3-month fresh new lows.

The percent of Russell 3000 stocks above their 10-day moving average is also at exhaustion levels.

The percent of S&P500 stocks above their respective 3,5 and 10-day moving average is singing the same tune.

I want to make something clear; these short-term breadth extremes normally are short-term positives that produce 3-5 days dead cat bounces.  Then we usually get a retest of the price low, and that’s when might see some positive divergences that may lead to a sustain bounce.
Work With Me
Stay Informed
4%, 13% breadth charts courtesy of Pradeep Bonde
By Frank Zorrilla|2018-02-02T12:09:12-05:00January 7, 2016 9:00 pm|