A Prescription For Profits

A Prescription For Profits

I’m always intrigued by huge bases, typically a prolonged period of contraction leads to a prolonged period of expansion, hence the term; the bigger the base, the higher into space it goes.  We’ve pointed out a few bases over the last year that have made huge moves after we flagged them.  We pointed out $QSII on 7/10/2013 it ran 18% in a few weeks, $PVA on 7/17/13 at $5 and a few months later at its peak it was up 250%, on 9/13/2013 we highlighted $HZNP at $2.75 at its peak 6 months later it was up 481%. These huge bases don’t show up on a regular basis especially after a long-running bull market, but when they do you have stay on top of them because once they emerge from their bases (stage 1 to stage 2), they usually do very well.

Stan Weinstein, the author of Secrets For Profiting In Bull and Bear Markets, has a great definition the “basing area,” specifically the one’s that are formed after several down months.

The Basing Area: “After XYZ has been declining for several months, it eventually will lose downside momentum and start to trend sideways. What’s actually taking place is that buyers and sellers are starting to move into equilibrium, whereas previously the sellers were far stronger, which is why the stock had plummeted. Volume will usually lessen–dry up–as a base forms. But often volume will start to expand late stage 1, even though prices remain little changed. This is an indication that dumping of the stock by disgruntled owners is no longer driving down the price. The buyers who are moving in to take the stock off their hands are not demanding any significant price concession.”

WebMD Health Corp. (WBMD) is the leading provider of health information services, serving consumers, physicians, healthcare professionals, employers, and health plans through our public and private online portals, mobile platforms and health-focused publications.
The WebMD Health Network includes WebMD.com, Medscape.com, MedicineNet.com, eMedicineHealth.com, RxList.com, OnHealth.com, Medscape Education (Medscape.org) and other WebMD owned sites and apps.
WebMD has been trading in a base for 9-months after peaking at $66 back in May of 2016. The sellers took charge and kept a lid on the stock until September of 2016, that’s when the buyers and sellers started to find equilibrium and the stock began to trade sideways between $49ish and $54ish. Buyers supported the lower end of the range, and the sellers held their own at the top of the range. All that started to change in February of this year, the buyers began to get a little more aggressive on the buy side, they are no longer waiting for the stock to get to the bottom of the range to pick up stock. What we have seen is a pattern of lower highs, this is exactly what happens to right before a stock that has been stuck in a range finally breaks out. 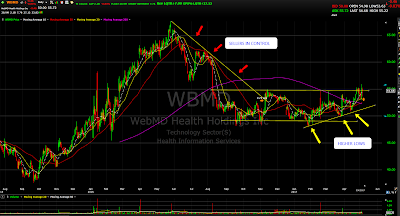 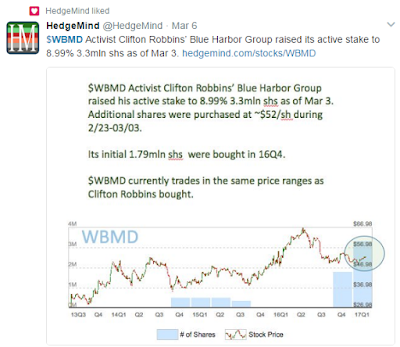 Here’s what he had to say about WebMD;

Frank Zorrilla, Registered Advisor In New York. If you need a second opinion, suggestions, and or feedback in regards to the market feel free to reach me at fzorrilla@zorcapital.com or 646-480-7463.
See How I Translate My Tweets & Blogs Into Actual 3rd Party Verified Trades
Work With Me
We live in a world in which we are bombarded with information, tweets, blogs, etc., content is the new salesman, content is the new marketing, content is the new networking. With information being so readily available, bloggers try to differentiate themselves with their writing skills, volume, and consistency, putting out blog posts to meet quotas. We are seeking to stand out from the crowd by showing performance, by taking all the information and seeking alpha, that’s the sole purpose of the blog. It won’t always be pretty; it’s never easy, and performance is spotty, but we seek superior risk-adjusted returns, not notoriety for our writing skills.  If this is something you can relate to, then this blog is for you.
DISCLAIMER
By Frank Zorrilla|2018-02-02T12:06:11-05:00May 5, 2017 10:16 am|